A bank overdraft is a temporary facility extended by a bank to corporates and other clients to withdraw funds from their account in excess of the balance. This facility is provided by the bank for a fee and interest is charged on the excess amount that is withdrawn for the length of the time. It is important to know the advantages and disadvantages of the bank overdraft facility in order to use it effectively. 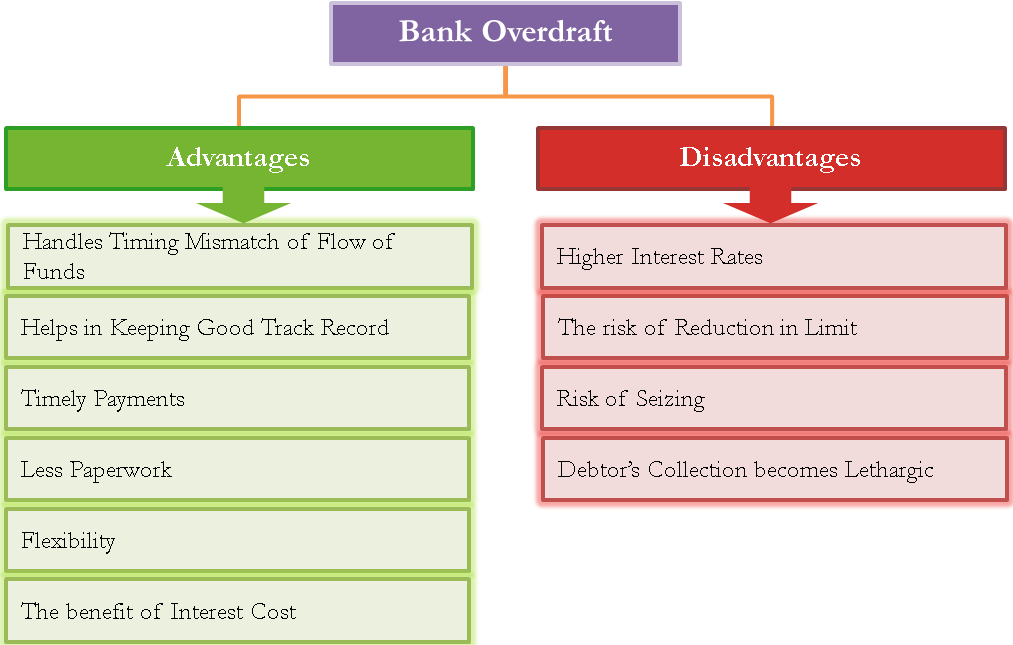 A bank overdraft is usually the best for businesses with greater movement of cash flow in a given time frame.  An overdraft can help reset a skipped cycle of rotation of inflow and outflow of cash. In other words, if sales proceeds and purchases result in a flow of money in and out many times during a week/month; an overdraft facility allows managing cash flow gaps that might arise due to timing mismatch.

If a check was made on the basis of some amount to be received, and if it is delayed, the check does not bounce due to inadequacy of funds.  Hence, overdraft facility allows for a better payment history.

It also ensures timely payments and avoidance of late payments penalties as payments can be made even if there is lack of sufficient balance in the account.

It requires less paperwork that would usually be required in long-term loans as overdraft facility is easy to avail.

Overdraft facility has the advantage of flexibility as one may take it at any time, for any amount (up to the limit allotted), and for even as less as one or two days.

The interest is calculated only on the amount of funds used. This allows for greater savings in the interest cost compared to a normal loan taken at a fixed interest rate. While in other loans, interest is paid even if the money remains unused. In this case, the charging of interest starts with the payments you make, but it stops instantly when there are receipts.

Overdraft facility comes at a cost. At times, the cost is usually higher than the other sources of borrowing. Also, if one goes above or exceeds the overdraft limit, the charges could be much higher.

♦ RISK OF REDUCTION IN LIMIT

Overdraft facility is a temporary loan and undergoes regular revisit by the bank. Hence, it runs a risk of a decrease in the limit or withdrawal of the limit. The withdrawal of limit may happen usually when company financials may represent poor performance; hence, the facility may be withdrawn especially when the company may require it the most.

Bank overdraft facility may at times be secured against inventory or other collaterals like shares, life insurance policies etc. The company may run a risk of those assets being seized if it fails to meet payments.

At times, availability of overdraft facility may make the company less strict on the collection of debtors’ payment. In other words, a company may not be too much on their feet to collect payments from debtors, as immediate payment outflows can be managed by overdraft facility.

Government Adda - January 3, 2020 0
Earth's atmosphere has a series of layers, each with its own specific traits. Moving upward from ground level, these layers are named the troposphere, stratosphere,...

All About Application Supported by Blocked Amount (ASBA)