The Economic Survey 2017 mention the concept of helicopter money as a monetary stimulus policy (conceptualized in the developed world).

Helicopter Money is a tactics with the central bank for stimulating the economy.

Just as the name suggests, helicopter money describes a situation where a helicopter would fly over a community and drop money from the sky.

Helicopter money was coined by economist Milton Friedman back in the 60s as an extreme way to fix a country’s economy. He stated: 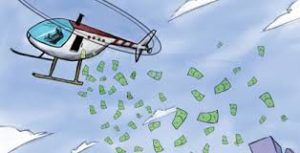 “Let us suppose now that one day a helicopter flies over this community and drops an additional $1,000 in bills from the sky, which is, of course, hastily collected by members of the community. Let us suppose further that everyone is convinced that this is a unique event which will never be repeated.”

His assumption is that the people would take this one-time monetary gift and spend it, thus jump starting the economy.

Bonds and their Types