Repo rate is the rate at which the central bank of a country (Reserve Bank of India in case of India) lends money to commercial banks in the event of any shortfall of funds.

Repo rate is used by monetary authorities to control inflation.

Banks borrow money by repo to meet their daily mismatches.

Repo auctions are conducted by RBI on a daily basis, except Saturdays. Here, minimum bid size is of Rs. 5 crore and multiple.

Repo borrowings have a tenure of 1 day to 90 days.

Reverse repo rate is the rate at which the central bank of a country (Reserve Bank of India in case of India) borrows money from commercial banks within the country.

It is a monetary policy instrument which can be used to control the money supply in the country.

An increase in the reverse repo rate will decrease the money supply and vice-versa, other things remaining constant.

The Cash Reserve Ratio is the amount of funds that the banks are bound to keep with Reserve bank of India as a portion of their Net Demand and Time Liabilities (NDTL).

The objective of CRR is to ensure the liquidity and solvency of the Banks.

When a bank’s deposits increase by Rs100, and if the cash reserve ratio is 9%, the banks will have to hold Rs. 9 with RBI and the bank will be able to use only Rs 91 for investments and lending, credit purpose. Therefore, higher the ratio, the lower is the amount that banks will be able to use for lending and investment. This power of Reserve bank of India to reduce the lendable amount by increasing the CRR, makes it an instrument in the hands of a central bank through which it can control the amount that banks lend.

Thus, it is a tool used by RBI to control liquidity in the banking system. 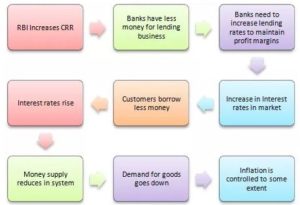 Reserve Bank does not pay any interest on the CRR balances.

This is the long term rate(Repo rate is for short term) at which central bank (RBI) lends money to other banks or financial institutions.

Bank rate is not used by RBI for monetary management now.

It is now same as the MSF rate.

Banks doesn’t need any collateral or security, while borrowing for a long term under Bank Rate.

It is a special window for banks to borrow from RBI against approved government securities in an emergency situation like an acute cash shortage.

The MSF was introduced by the RBI in its monetary policy for 2011-12 after successfully test firing it from December 2010 onwards.

SLR is used by bankers and indicates the minimum percentage of deposits that the bank has to maintain in form of gold, cash or other approved securities. Thus, we can say that it is ratio of cash and some other approved liability (deposits). It regulates the credit growth in India.

Government Adda - January 7, 2020 0
A book in which all the cash receipt and cash payments including the funds that are deposited in the bank and funds which are...