Averages can be defined as the central value in a set of data. Average can be calculated simply by dividing the sum of all values in a set by the total number of values. In other words, an average value represent the middle value of a data set. The data set can be of anything like age, monety, runs, etc.

AVERAGE OF NUMBERS HAVING DIFF IN ARITHMETIC:
There are two cases:

If the average of n numbers is “M” and one number is included, then two cases arise:

If the average of n numbers is “M” and one number is excluded, then two cases arise:

If the average of n numbers is “M” and one number is excluded and another number is included then two cases arise:

Try out some Examples

The average age of 8 persons is increased by 3 years when 2 men whose age is 40 years and 50 years are substituted by two other men. Find the average age of two new men.
Solution:
In this case, there are two persons including and excluding. So we have to consider both simultaneously.
Total age of excluding men= 40 + 50 = 90 years
Increased age = 3 ×× 8 = 24 years
This increased age is because the of including men is more than the exclexcluded.
Average age of new men =(90+24)2(90+24)2 = 57
In this case we cannot calculate individual value of each included men.

Try out some Examples:

Q. 1) The average weight of 4 men is increased by 3 kg when one of them who weighs 120 kg is replaced by another man. What is the weight of the new man? 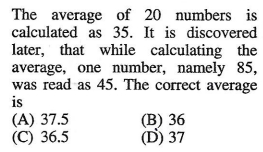 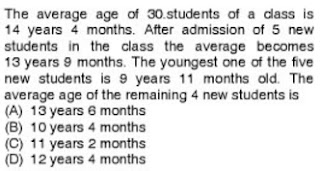 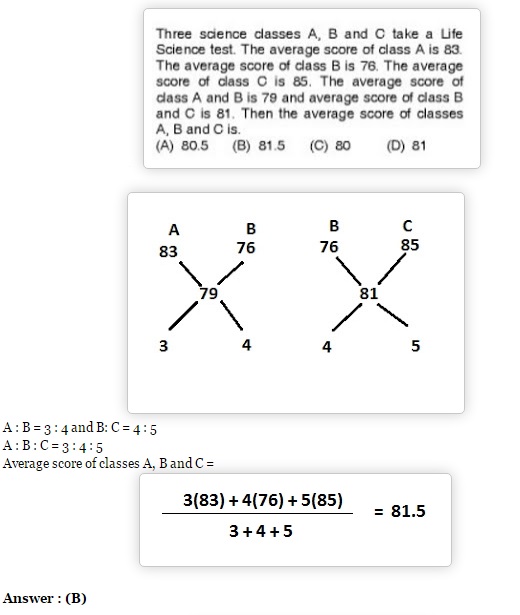 Questions based on averages can be easily solved using shortcuts. By using shortcuts, any question can be solved quickly and efficiently which can save a lot of time. So, some shortcuts to solve average questions are explained below along with illustrations.

The average of a batsman in 16 innings is 36. In the next innings, he is scoring 70 runs. What will be his new average?

Here are a few more average questions and their solutions using the same technique.

The average marks of 19 children in a particular school is 50. When a new student with marks 75 joins the class, what will be the new average of the class?

Here is another question where the average dips.

Now here is a technique which will help to compute the new value when the average is given. Take this question for example:

Let the average age of the teacher = x

Using the shortcut, based on the same method used previously:

This change in 0.2 is reflected over a sample size of 30.

Thinkquest- The average age of 26 students in an MBA school is 30. One student among these quits the school in between. Can you find the age of that student if the new average is 29.8?

To maximize the number of players who scored 18 and above number of goals, one should assume that only one person has scored 20. To counter him, there will be one person who will score 12 goals.

One more person is included and the weight = 48 kg

Government Adda - February 1, 2018 0
Union Budget is a comprehensive account of the finances. It lays down consolidated report of revenue from all sources, and outlays for schemes and...

Google Payment App ‘Tez’ to be Launched on Monday

Shortcuts & Formulas on Problem Based on Ages