A bank is a financial institution whose purpose is to receive deposits and lend money to individuals and businesses, disburse payments, invest funds in securities for a return, and safeguard money. It services savings and current (chequing) accounts, provides credit to borrowers in the form of loans and through credit cards, and acts as trustees of its clients. Banks perform all of these functions or some of them depending on their nature. 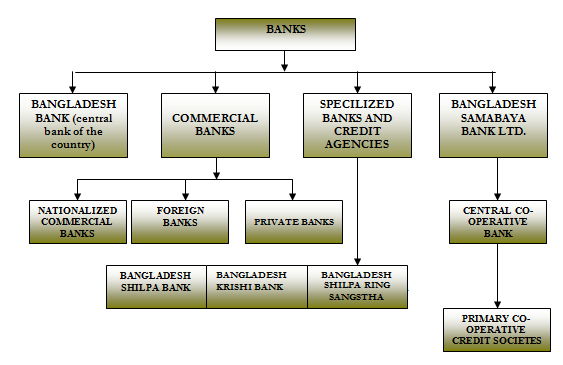 Commercial Banks are those banks whose main work is receiving of deposits, lending of money and financing the trade of a country.

They give short-term credit to trade and commerce and they are not in position to grant long-term loans to industries because their deposits are only for a short-period.

In India, majority of the banks are commercial banks.

The Central Bank is the organ of government that undertakes the major financial operations of the government and by its conduct of these operations and by other means influences the behaviour of financial institutions, so as to support the economic policy of the Government.

The important responsibility of the Central Bank is to control the credit of the country in accordance with the needs of business and with a view to carrying out the board monetary policy adopted by the state. The Reserve Bank of India (RBI) is such a Bank in our country.

Foreign Exchange Banks are that types of banks which normally finance foreign trade. They deal in international business of payments through the purchase and sale of exchange bills. They convert home currency into foreign currency and viva-versa. It is on this account that these banks have to keep in reserve with themselves stock of currencies of various countries. They try to open branches in foreign countries to carry on their business. Majority of the foreign exchange banks working in India are under the control of foreigners.

There banks perform the services of mobilising the savings of men of small means. The idea behind opening this type of bank is to encourage thrift and discourage hoading. In India, Post Offices are also doing the work and they have opened in their premises the “Savings Bank Account” counter.

The main work of the Agricultural Bank is to provide loans and advances to farmers. They work on co-operative principles.

It has been divided under two heads:

(a) Land Mortgage Banks, and

Type of Bank # 7. The Indigenous Banks:

The Indigenous Banks work as an individual or private firm receiving deposits and dealing in Hundies or lending money. They do business operations in different parts of the country under different names. In the Punjab and U.P. Sahukars, Mahajans and Khatris, in Madras (Chennai) they are called Chettys, in Mumbai Shroffs and Marwaris and in Bengal Seths and Baniyas.

EXIMS Banks popularly known as Export-Import Bank is another type of bank which was set up in India in January 1981. Its Authorised capital was Rs. 200 crores which can be raised to Rs. 500 crores. Its main work is to provide long-term finance to exporters and importers.

There are certain other kinds of banks like Investment Banks, Labour Banks and Student’s Banks. American Trade Unions started Labour Banks. Some of the colleges in those countries have started Students Banks to receive the deposits of the technical and specialised students. Similarly, in England and America, there are investment banks whose object is to control the distribution of capital advanced in the country.

Government Adda - December 25, 2019 0
A convex mirror, or simply put a curved mirror, is a mirror in which the reflective surface bulges toward the light source. The surface...

All About Types of Banks in India