These are Relations between two people only.

Break the given sentence at is/was/as and resolve it from last point to is/was/as to get easy solution for the problem.

Carefully observe the given examples.

Pointing to a lady Ravi said,” She is the only daughter of the father of my sister’s brother”. How is she related to Ravi?

Break the given sentence at is.

From the last, in the view of Ravi,

So,that becomes “she is my sister”

So, answer is sister.

John introduces Mary as the daughter of the only son of my father’s wife. How is Mary related to john?

Break the given sentence at as.

Resolving from the last , In the view of john,

Only son of mother – himself i.e. john

So, answer is daughter.

NOTE :  Sometimes they might ask like how is john related to Mary. In that case answer is father. So, don’t make answers without clear understanding in this type of problems.

Break the given sentence at is/was/as.

And also resolve the sentence from the first upto is /was/as.

Then you will get easy solution. Observe the below examples.

Pointing to a man in the photograph, a Woman says,” His mother’s only daughter is my mother”. How is man related to woman?

Break the sentence at is.

From the last, up to is : my mother – Woman’s mother

From the first, up to is : his mother’s only daughter – his sister

So, the answer is Mother’s brother i.e. Uncle.

If question asks like how is woman related to that man? Then answer is sister’s daughter i.e. niece.

Introducing Suresh, Kalpana said,” His brother’s father is the only son of my grandfather”.   How is Kalpana related to Suresh?

Break the sentence at is.

From the last up to is : The only son of my grandfather – father

From the first up to is : his brother’s father – father

So, they are brother & sister.

Then they both may be brothers / sisters /  bother & sister depending upon their sex.

In this, mutual blood relations depending on more than two persons mentioned. These type of problems can be solved with the help of diagrams.

Follow these symbols in the diagram to avoid confusion.

Better to use the same generation in one horizontal row in the diagrams.

A and B are brothers and C and D are sisters. A’s son is D’s brother. How is B related to C?

By using above notations we can draw the below diagram. A,B are taken ‘+’ and C ,D 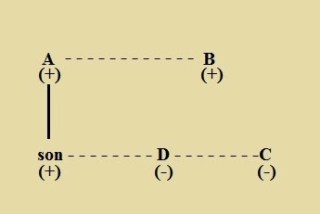 It says that A is C’s father. Father’s brother is uncle. So, answer is uncle.

Read the information carefully and answer the question given below it.

Draw the diagram with given instructions below. 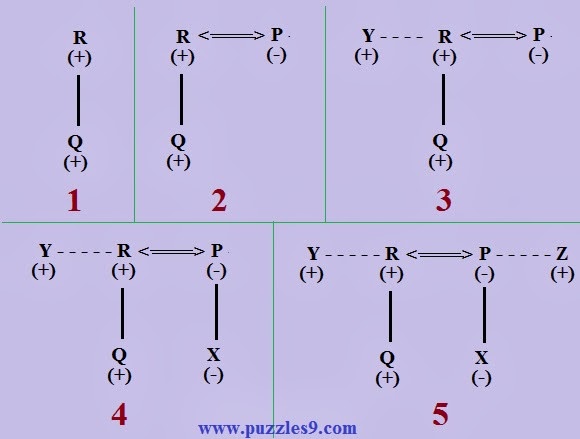 NOTE : IN SOLVING MIXED BLOOD
RELATIONS MAKE SURE THAT YOUR DIAGRAM IS IN CORRECT REPRESENTATION.

In this type, relationships represented by codes and symbols like + , – , / , *. You have to analyze the required relation based on the given code. In this also you may need diagrammatic representation of problem to solve it. Use the same representation used in mixed blood relations.

In the coding equation better to solve the code from last letter.

So, answer is Nephew.

How to Solve Statement and Assumptions Tricks & Tips : Concept 2020

How to Solve Types of Computer Malware : 2020