A chemical bond is the physical phenomenon of chemical substances being held together by attraction of atoms to each other through sharing, as well as exchanging, of electrons -or electrostatic forces.

In general, strong chemical bonds are found in molecules, crystals or in solid metal and they organize the atoms in ordered structures.

Weak chemical bonds are classically explained to be effects of polarity, or the lack of it, of strong bonds. To draw the lewis diagrams for molecular compounds or ions, follow these steps below (we will be using H2O as an example to follow):

Oxygen (O)–Group VIA: therefore, there are 6 valance electrons

2) If the molecule in question is an ion, remember to add or subract the respective number of electrons to the total from step 1.

If the ion has a positive charge (cation), subtract the corresponding number of electrons to the total number of electrons (i.e. H3O+ has a positive charge of 1+, so you subtract 1 extra electron to the total; 6 + 1(3) = 9 – 1 = 8 total electrons). A + sign means the molecule has an overall postive charge, so it must be missing one electron. Cations are positive and have weaker electron affinity. They are mostly composed of metals; their atomic radii are larger than the nonmetals. This consequently means that shielding is increased, and electrons have less tendency to be attracted to the “shielded” nucleus.

From our example, water is a neutral molecule, therefore no electrons need to be added or subtracted from the total.

3) Write out the symbols of the elements, making sure all atoms are accounted for (i.e. H2O, write out O and 2 H’s on either side of the oxygen). Start by adding single bonds (1 pair of electrons) to all possible atoms while making sure they follow the octet rule (with the exceptions of the duet rule and other elements mentioned above).

4) If there are any leftover electrons, then add them to the central atom of the molecule (i.e. XeF4 has 4 extra electrons after being distributed, so th4 extra electrons are given to Xe: like so. Finally, rearrange the electron pairs into double or triple bonds if possible. 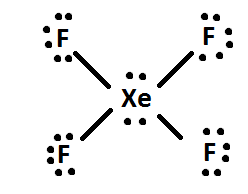 Most elements follow the octet rule in chemical bonding, which means that an element should have contact to eight valence electrons in a bond or exactly fill up its valence shell. Having eight electrons total ensures that the atom is stable. This is the reason why noble gases, a valence electron shell of 8 electrons, are chemically inert; they are already stable and tend to not need the transfer of electrons when bonding with another atom in order to be stable. On the other hand, alkali metals have a valance electron shell of one electron. Since they want to complete the octet rule they often simply lose one electron. This makes them quite reactive because they can easily donate this electron to other elements. This explains the highly reactive properties of the Group IA elements.

When substances participate in chemical bonding and yield compounds, the stability of the resulting compound can be gauged by the type of chemical bonds it contains.