Circle and its chords

A circle is a type of line. Imagine a straight line segment that is bent around until its ends join. Then arrange that loop until it is exactly circular – that is, all points along that line are the same distance from a center point.

There is a difference between a circle and a disk. A circle is a line, and so, for example, has no area – just as a line has no area. A disk however is a round portion of a planewhich has a circular outline. If you draw a circle on paper and cut it out, the round piece is a disk.

Properties of a circle

In any circle, if you divide the circumference (distance around the circle) by its diameter (distance across the circle), you always get the same number. This number is called Pi and is approximately 3.142. See Definition of pi.

A circle is actually a special case of an ellipse. In an ellipse, if you make the major and minor axis the same length, the result is a circle, with both foci at the center.

Circle as a conic section

You can define a circle as the shape created when a plane cuts through a cone at right angles to the cone’s axis.

Circle as a locus

Parts of a circle 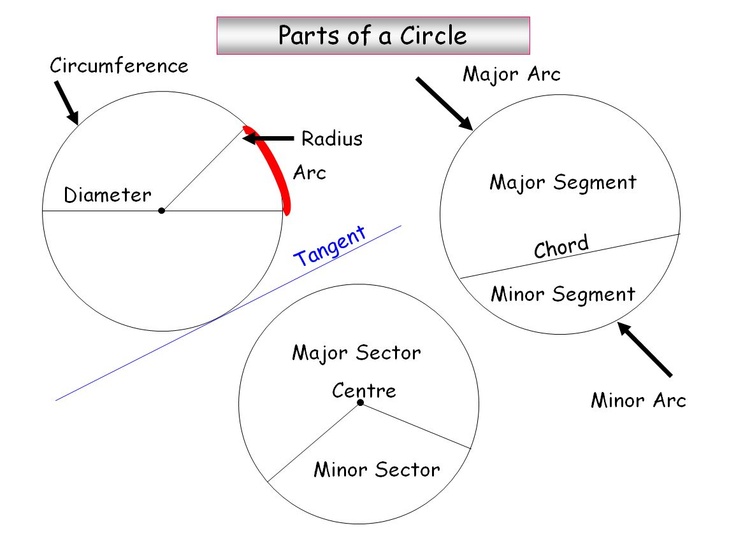 From Latin: semi – “half”
Half a circle. A closed shape consisting of half a circle and a diameter of that circle*. A semicircle is a half circle, formed by cutting a whole circle along a diameter line, as shown above. Any diameter of a circle cuts it into two equal semicircles.

*  An alternative definition is that it is an open arc. See note at end of page.

Area of a semicircle

So, the formula for the area of a semicircle is:

Perimeter of a semicircle

So, the formula for the perimeter of a semicircle is:

where:
R  is the radius of the semicircle
π  is Pi, approximately 3.142By factoring out R, this simplifies slightly to

Angle inscribed in a semicircle

The angle inscribed in a semicircle is always 90°.

An alternative definition of a semicircle is that it is simply anarc – a curved line that is half the circumference of a circle, without the straight line linking its ends. This means it is not a closed figure, and so:

To avoid confusion, it is best to refer to this as a “semicircular arc”.

From Greek: khorde “gut, string.”
A line that links two points on a circle or curve. (pronounced “cord”)
Try this Drag either orange dot. The blue line will always remain a chord to the circle.

Calculating the length of a chord

Two formulae are given below for the length of the chord,. Choose one based on what you are given to start.

1. Given the radius and central angle

Below is a formula for the length of a chord if you know the radius and central angle.

2. Given the radius and distance to center

Below is a formula for the length of a chord if you know the radius and the perpendicular distance from the chord to the circle center. This is a simple application of Pythagoras’ Theorem.

The perpendicular bisector of a chord always passes through the center of the circle. In the figure at the top of the page, click “Show Right Bisector”. Then move one of the points P,Q around and see that this is always so. This can be used to find the center of a circle: draw one chord and its right bisector. The center must be somewhere along this line. Repeat this and the two bisectors will meet at the center of the circle.

If two chords of a circle intersect, the intersection creates four line segments that have an interesting relationship.

Intersecting Chord Theorem
When two chords intersect each other inside a circle, the products of their segments are equal.

This theorem states that A×B is always equal to C×D no matter where the chords are.

In the figure below, drag the orange dots around to reposition the chords. As long as they intersect inside the circle, you can see from the calculations that the theorem is always true. The two products are always the same.

(Note: Because the lengths are rounded off for clarity, the calculations will be slightly off if you enter the displayed values into your calculator).

When making doors or windows with curved tops we need to find the radius of the arch so we can lay them out with compasses.

Accountancy Notes For SSC CGL 2019-20 on : Book-keeping: An introduction

Shri Rajiv Kumar Director on the Central Board of Directors RBI

Government scheme of the day