The Lok Sabha has passed the Criminal Law (Amendment) Bill 2018 that proposes to enhance punishment for rape of a child. The Bill provides for death penalty as the maximum punishment in cases of rape of a child under 12. The Bill seeks to replace the Criminal Law (Amendment) Ordinance promulgated on April 21 following an outcry over the rape and murder of a minor girl in Kathua in Jammu and Kashmir and the rape of another woman at Unnao in Uttar Pradesh.

Responding to the passage of the Bill in the Lok Sabha on July 30, Minister of State for Home Affairs Kiren Rijiju said that the POSCO was gender-neutral while the new law pertains to girls specifically. The Criminal Law (Amendment) Bill 2018 will amend relevant Sections of the IPC, CrPC and also POCSO Act.

What is new in the Bill? 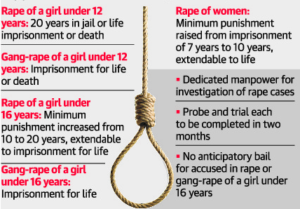 The Criminal Law (Amendment) Bill 2018 enhances the minimum sentence for offence of rape against girl children of all three age categories. Under new law, if the victim is under 12 years of age, the culprit faces minimum sentence of 20 years, up from 10 years previously.

If the victim is aged between 16 and 18, the offence of rape is punishable with minimum punishment of 10-year jail term and maximum is life imprisonment.

Repeat offenders will be punished with life imprisonment or death.

The case is to be tried in a fast track court. The Bill states that any appeal against a sentence by the trial court must be disposed of within six months.

Accused is not entitled to anticipatory bail, under new law, in offences of rape of child less than 16 years of age.

Study notes on ” Number of Players in Different sports games...

Government Adda - November 5, 2019 0
General Awareness play a vital role in all  Examination. we can expect  Questions from different Topics.In Banking and other competitive exams like RRB, CDS,...

All About (BCs) model for financial inclusion