The production possibility curves is a hypothetical representation of the amount of two different goods that can be obtained by shifting resources from the production of one, to the production of the other. The curve is used to describe a society’s choice between two different goods. Figure 1, shows the two goods as consumption and investment. Investment goods are goods that are involved in the production of further consumption goods. They include physical capital such as machines, buildings, roads etc. and human investments such as education and training. The sums of all investments make up the capital stock of a society. To show the point where all resources were used to produce consumption goods, one should move straight up the vertical axes to the curve. To show the point were all resources were used to produce investment goods, one should move straight on the horizontal axes to the curve. Both points are extreme and unrealistic. Both points A and B represented more realistic combinations, with point A showing more consumption and less investment, while point B shows more investment and less consumption. 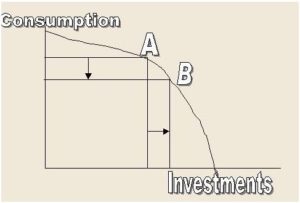 The production possibility curve of figure 1., shows the trade off in production between investments and consumption goods. Any two categories of different goods could be chosen. What they are is arbitrary. The curve is used to show during a specific period, what could be produced of the combination of the two goods, if all resources are fully employed, while technology and institutions do not change. Given those conditions, societies output potential is realized anywhere on the curve (which is called the production possibility curve’s frontier). Unemployed resources (labor, capital, physical resources) of any kind would result in an inefficient production level, and would be shown as a point to the left, or inside the curve. By definition all point to the right or outside of the production possibility curve (frontier) are impossible, given the limits of resources and technology.

This hypothetical curve shows how much of consumption must be given up to increase investments (the movement from A to B). This demonstrates the important economic concept of Opportunity Cost, which is the cost of anything (such as an investment in a new road), in terms of what has to be given up. This is the general concept of cost in economics. For the individual, these costs could be financial, but they could include a individual’s time and other intangibles. For society the production possibility curve shows opportunity cost only on the curve itself. If society found itself inside the curve, for instance, during a recession (where all resources are not being utilized), then a movement out to the production possibility curve has no real opportunity cost. The unemployed resources are just being utilized (unemployed labor going back to work).

Opportunity cost is different than accounting cost, and unfortunately is not so easily calculated. Opportunity cost has a subjective element. For instance, to determine the opportunity cost of a new highway, includes the obvious cost of materials, of labor, of land, (these are the easily determined accounting cost), but there are also intangible cost, such as the cost to the community of the disruption involved with new construction, and the change in the communities effected by the highway. Also there may be costs connected to increase pollution (with health effects), increased noise, and an increase in general unattractiveness. These cost are real, but are difficult to both measure and evaluate. Putting a dollar value on these cost adds a subjective element to the evaluation. As a result sometimes they are ignored.

Economist are often asked to make cost/benefit studies of economic projects, to help determine their overall value. But because of the intangibles, and subjective nature of both benefits and opportunity costs, no definitive answer can be given. The studies should be viewed only as one input into the decision process, and not as definitive.

The production possibility curve bows outward as a result of the law of increasing cost. The law of increasing costs takes place when society uses more resources (which takes those resources always from the production of the other good), to product any specific good. This causes increased opportunity cost with each additional unit produced of that specific good (increasing amounts of the other good have to be given up). The reason is simply that, as a nation, certain resources are better suited for producing some goods then they are for other goods. Some resources would be better adapted for use with investment goods, for instance, than consumption goods. Resources are generally not perfectly adaptable for producing both categories of goods (consumption vs. investment). Therefore, increasing the output of a particular good, must use less efficient resources than those already used. Hence the increasing opportunity cost of producing the additional units and the law of increasing cost. The more specialized the resources, the more bowed out the production possibility curve.

The production possibility curve can be viewed as a useful tool to demonstrate the concepts of opportunity cost, and the law of increasing cost. It also protrays the underlying condition of scarcity and unlimited wants, that are paramount for neoclassical economics. The underlying scarce resources determine the limits of the production output, and thus consumption. Movement of the curve outward is seen as an unambiguous good, which can fill those unlimited wants by increasing consumption. A society’s rational choice, usually seen as a market solution, can be defined as a choice of one of the production possibility points on the curve. The production possibility curve is a useful tool to explain concepts in neoclassical economics.

The production possibility curve is strictly hypothetical and static in nature. There are no practical ways to actually apply and calculate such a curve. It’s use is as the starting point for conceptualizing, and it provides an example of neoclassical economic’s fondness for methodological deduction (starts from general premises).

Also the humanistic paradigm have little use for of the curve as a tool of analysis. This paradigm, which in contrast to neoclassical economics, question the unlimited wants of consumers for goods and service. The humanistic paradigm argues that once basic physical needs are secured, now and into the future, the real needs becomes social and achievement needs. They would further argue that these needs are not met effectively in the process of buying and consuming of goods and services, even though this may be the attempt on the part of some. With the strong cultural value of work (work ethic), these needs are more effectively fulfilled in the process of doing and contributing by work to something outside of oneself. Whatever that is, it certainly will very within the context of one’s culture and society. In the United States, work for many fulfilled these needs, or at least provides the hope for fulfilling these needs. Not any job, of course, but good jobs which besides securing one’s physical well-being also allows one to belong, to have self-esteem and to feel a sense of achievement.

Various alternative schools of economic thought believe that human needs and wants are not absolute but can be manipulated. And such needs and wants are all relative to our particular culture and our status within that culture. Therefore the production possibility curve, and its simple assumptions misses the mark, and scarcity is misapplied. For humanistic economist opportunities to satisfy the higher social and achievement needs are what is really scarce.

Government Adda - December 10, 2019 0
Distance We define distance as a scalar expression; that implies how much area is covered by an object while travelling from one location to another....

All about BANK CARD