Nitrogen (N) is an essential component of DNA, RNA, and proteins, the building blocks of life. All organisms require nitrogen to live and grow. Although the majority of the air we breathe is N2, most of the nitrogen in the atmosphere is unavailable for use by organisms. This is because the strong triple bond between the N atoms in N2 molecules makes it relatively inert, or unreactive, whereas organisms need reactive nitrogen to be able to incorporate it into cells. In order for plants and animals to be able to use nitrogen, N2 gas must first be converted to more a chemically available form such as ammonium (NH4+), nitrate (NO3-), or organic nitrogen (e.g., urea, which has the formula (NH2)2CO). The inert nature of N2 means that biologically available nitrogen is often in short supply in natural ecosystems, limiting plant growth.

Nitrogen is an incredibly versatile element, existing in both inorganic and organic forms as well as many different oxidation states. The movement of nitrogen between the atmosphere, biosphere, and geosphere in different forms is called the nitrogen cycle.

For Nitrogen to be used by different life forms on Earth, it must change into different states. Nitrogen in the atmosphere, or air, is N2. Other important states of nitrogen include Nitrates (N03), Nitrites (NO2), and Ammonium (NH4). 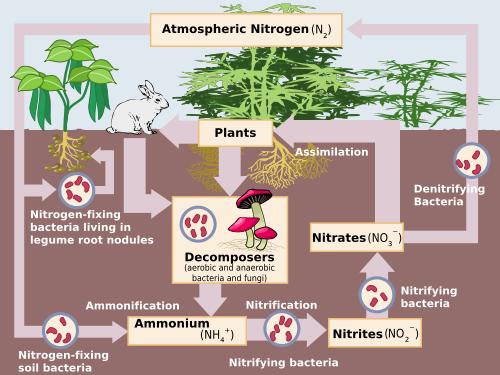 Processes in the Nitrogen Cycle

Government Adda - December 6, 2019 0
Immunization Programme in India was introduced in 1978 as ‘Expanded Programme of Immunization’ (EPI) by the Ministry of Health and Family Welfare, Government of...

Know all about IFSC Code