General Awareness play a vital role in all  Examination. we can expect  Questions from different Topics.In Banking and other competitive exams like RRB, CDS, LIC AO, RBI, SSC, UPSC, FCI, UIIC, OICL, SBI Clerks and PO the questions on Hydrosphere are being asked. Here we have given Geography study notes on Hydrosphere for SSC CGL Examinations 2019-20 & other examination. Candidates those who are all preparing for the Examination can use this study material.

A hydrosphere is the total amount of water on a planet. The hydrosphere includes water that is on the surface of the planet, underground, and in the air. A planet’s hydrosphere can be liquid, vapor, or ice.

On Earth, liquid water exists on the surface in the form of oceans, lakes and rivers. It also exists below ground—as groundwater, in wells and aquifers. Water vapor is most visible as clouds and fog.

Water is in the air, on the land, between the rocks, and in every living thing. Water, in its purest form, is the compound H2O. There are two hydrogen (H) atoms bonded to one oxygen (O) atom. Generally, you won’t find pure water. There are usually other compounds, ions, or particles mixed with water. While water may move and carry other substances with it,  small water molecules are the things that make life on Earth possible.

The hydrological cycle transfers water from one state or reservoir to another. Reservoirs include atmospheric moisture including snow, rain and clouds, streams, oceans, rivers lakes, groundwater, subterranean aquifers, polar icecaps and saturated soil. 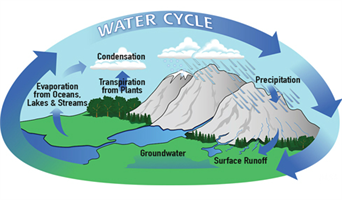 Solar energy is the source of heat and light and gravity causes the transfer from one state to another over periods from hours to thousands of years. Most evaporation comes from the oceans and is returned to the earth as snow or rain.

Importance of the hydrosphere

It is so easy sometimes to take our hydrosphere for granted and we seldom take the time to really think about the role that this part of the planet plays in keeping us alive. Below are just some of the important functions of water in the hydrosphere:

Government Organization of the Day

Study Notes on ” List of Famous Companies and their...

All about Leasing And its type