Immunization Programme in India was introduced in 1978 as ‘Expanded Programme of Immunization’ (EPI) by the Ministry of Health and Family Welfare, Government of India. In 1985, the programme was modified as ‘Universal Immunization Programme’ (UIP) to be implemented in phased manner to cover all districts in the country by 1989-90 with the one of largest health programme in the world. Despite being operational for many years, UIP has been able to fully immunize only 65% children in the first year of their life.

To strengthen and re-energize the programme and achieve full immunization coverage for all children and pregnant women at a rapid pace, the Government of India launched “Mission Indradhanush” in December 2014.

The ultimate goal of Mission Indradhanush is to ensure full immunization with all available vaccines for children up to two years of age and pregnant women. The Government has identified 201 high focus districts across 28 states in the country that have the highest number of partially immunized and unimmunized children. 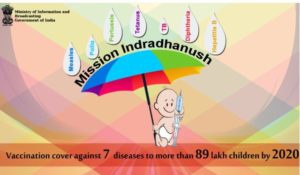 To further intensify the immunization programme, Prime Minister Shri Narendra Modi launched the Intensified Mission Indradhanush (IMI) on October 8, 2017. Through this programme, Government of India aims to reach each and every child up to two years of age and all those pregnant women who have been left uncovered under the routine immunisation programme/UIP. The special drive will focus on improving immunisation coverage in select districts and cities to ensure full immunisation to more than 90% by December 2018. The achievement of full immunisation under Mission Indradhanush to at least 90% coverage was to be achieved by 2020 earlier. With the launch of IMI, achievement of the target has now been advanced.

Under IMI, four consecutive immunization rounds will be conducted for 7 days in 173 districts (121 districts and 17 cities in 16 states and 52 districts in 8 northeastern states) every month between October 2017 and January 2018. Intensified Mission Indradhanush will cover low performing areas in the selected districts (high priority districts) and urban areas. Special attention will be given to unserved/low coverage pockets in sub-centre and urban slums with migratory population. The focus is also on the urban settlements and cities identified under National Urban Health Mission (NUHM).

The Government will launch the second phase of nationwide immunisation drive, i.e. Intensified Mission Indradhanush 2.0, to mark the 25 years of Pulse polio programme.

Government Adda - December 9, 2019 0
The nature and scope of economics are related to the study of wealth or human behaviour or of scarce resources. The scope is very...

All About Application Supported by Blocked Amount (ASBA)