Japanese organisers formally introduced their doe-eyed 2020 Olympic mascots to the world .Tokyo 2020 released a shortlist of mascot pairs in December last year and asked schoolchildren in Japan and Japanese schools outside the country to vote for their favorites. More than 16,700 schools participated.

The voting process was part of the country’s nationwide education program called “Yoi Don!” which means “Get Set!”. The program aims to teach children the values of the Games and allow them to get involved in initiatives linked to Tokyo 2020. 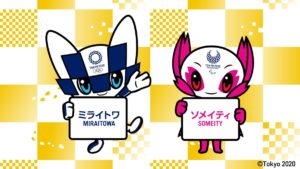 The blue-checked Olympic mascot was dubbed “Miraitowa” – combining the Japanese words for future and eternity, organizers said at an event in Tokyo. It expresses the hope for a bright future stretching off forever.

Its Paralympic partner which sports pink checks is called “Someity” – borrowing from the word for a variety of Japan’s iconic cherry trees and the English expression “so mighty”. The characters are said to combine tradition and innovation, organizers .

Miraitowa is a character “that embodies both old tradition and new innovation,” says the description. “(Miraitowa) has an old-fashioned charm that reflects tradition and also has a high-tech, cutting edge vibe. It has strong sense of justice, and is very athletic. The Mascot has a special power allowing it to move any where instantaneously,” it says.

“(Someity) is usually calm, however, it gets very powerful when needed. It has a dignified inner strength and a kind heart that loves nature. It can talk with stones and the wind. It can also move things by just looking at them,” according to the profile.

Mascots have been used at the Olympic Games since 1968 to represent the culture of the host country. There have been mascots of all shapes and sizes — from dachshunds to bears, Greek gods to alien-like hybrids that incorporated aspects of the host’s culture, history or wildlife.

The Tokyo Olympics are set to begin on July 24, 2020, and run through until August 9. The Paralympics will take place between August 25 and September 6.

Government Adda - December 2, 2019 0
Consumption is an essential economic activity. The quantity and quality of consumption determine the standard of living of the people. Consumption is the act...