The main purpose behind designing model contract farming act is to integrate the farmers with wholesale buyers for better value acquisition. Under this model act, arrangements have been made to prepare a regulatory and policy framework for contract farming.

♦ In this draft of the law called Agricultural Product and Livestock Contract Farming and Services (Promotion and Vantage) Act 2018, the states have been asked to keep out of the purview of the Agricultural Produce Marketing Committee (APMC) Act.

♦ This will help buyers save between 5% and 10% of their transaction cost.

♦ Other key features of the Model Contract Law include the appointment of a committee or officer at district/block/taluka level for online registration and keeping a record of the contract to ensure effective implementation.

What is contract farming?

♦ Under contract farming, agricultural production (including livestock and poultry) is done on the basis of crop pre-agreement agreement between the buyer and the producer.

♦ There are buyers, namely, food processing units and exporters and are a productive, farmer or farmer organization.

♦ Under contract farming, not only are the manufacturers able to reduce the market price and the risk of fluctuation in demand, but buyers are also in a position to reduce the risk of unavailability of quality production.

♦ According to the provisions described in this Model Act, under a contract agreement, productive input (such as technology, pre-harvest and subsequent crop infrastructure) can get support from the buyer for improvement in the production.

♦ It is described in this contract that while supporting the improvement in production, the buyer can not build any permanent structure on the land of the producer.

♦ It has also been clarified that the rights of the producer’s underground or land ownership cannot be transferred. 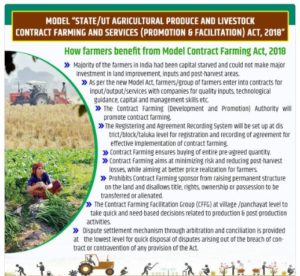 Out of the purview of APMC

Under this Act, while farming the contract, it has been out of the purview of state APMC. The advantage of this is that now the buyer will not be required to pay market fee and commission fee for APMC to cultivate contract. In addition, necessary guidelines have also been provided to establish state-level contract farming (promotion and facility) authority to ensure the implementation of Model Act.

♦So far in some states, it is necessary for registration to be registered by Agricultural Product Marketing Committee (APMC) for contract farming.

♦Contract agreements for agriculture are registered with APMC. APMC works to resolve the disputes that occur during these contracts.

♦If the contract is being cultivated, then the APMC is given the fixed duty according to the market.

♦States are given the right to implement laws related to contract farming under the APMC Act, 2003 for contract-based cultivation.

Government Adda - January 3, 2020 0
Magnetism Magnetism is a physical phenomenon, a highly diversified discipline that’s closely associated with magnets and magnetic fields, which are triggered from the motion of...