Q2. One filling pipe A is 5 times faster than second filling pipe B. If B can fill a cistern in 36 minutes, the find the time when the cistern will be full if both fill pipes are opened together.
(a) 6 minutes
(b) 8 minutes
(c) 4 minutes
(d) 12 minutes
(e) None of these 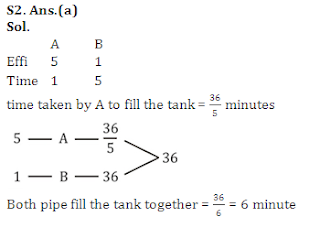 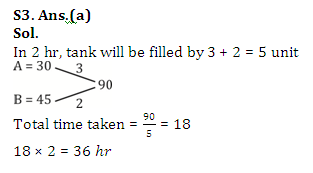 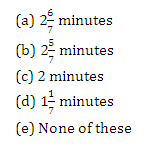 Q7. A bath can be filled by the cold water pipe in 20 minutes and by the hot water pipe in 30 minutes. A person leaves the bathroom after turning on both pipes simultaneously and returns at the moment when the bath should be full. Finding, however, that the waste pipe has been open, he now closes it. In 6 minutes more the bath is full. In what time would the waste pipe empty it?

Q8. A water tank can be filled by a tap in 30 minutes and another tap can fill it in 60 minutes. If both the taps are kept open for 5 minutes and then the first tap is closed, how long will it take for the tap to fill the remaining part of the tank?
(a) 20 minutes
(b) 25 minutes
(c) 30 minutes
(d) 45 minutes
(e) None of these 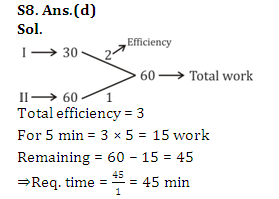 Q14. Tap A can fill a tank in 20 hours, B in 25 hours but tap C can empty a full tank in 30 hours. Starting with A, followed by B and C each tap opens alternatively for one hour period till the tank gets filled up completely. In how many hour the tank will be filled up completely?

Government Adda - January 8, 2020 0
Deltas are wetlands that form as rivers empty their water and sediment into another body of water. The Nile delta, created as it empties...

chemistry study notes on Mixture and its type

Computer Quiz For All Bank Exam

ABOUT US
We provide all Govt Jobs Like Banking, SSC, FCI,UPSC, Railways and all other important government exams Study Materials, Tricks, Quizzes, Notifications, Videos etc.
Contact us: GovernmentaddaOfficial@gmail.com
FOLLOW US
© 2021 Governmentadda.com. All Right Reserved.
MORE STORIES
Cut Off Marks