The Lok Sabha on Tuesday passed a bill to amend the anti-graft law by seeking to punish bribe-givers for the first time along with the bribe takers. The Prevention of Corruption (Amendment) Bill, 2018, was already passed by Rajya Sabha last week.

The passage of the ‘Prevention Of Corruption (Amendment) Bill, 2018’ delivers another telling blow against corruption, marking an important stage in the series of incessant, decisive steps taken by the NDA government to clean up the system emphasising on transparency and accountability.

Highlights of the bill

3. Gifts criminalised: Gifts received for established undue advantage/malafide motive are now considered an act of corruption. Previously all gifts were exempt from scrutiny, allowing for abuse.

4. Collusive bribe givers criminalised: For the first time, the ‘giving of bribe’ has now been made a direct offence on par with ‘taking of bribe’ (earlier was viewed only as abetment). At the same time, protection has been built-in against coercive bribery, as long as the victim comes forward within 7 day

5. Corporate bribery criminalised: For the first time, superior functionaries of a commercial organisation will be held responsible, if their employee/agent is proven to have bribed with their approval, for advancement of the organisation’s interests. 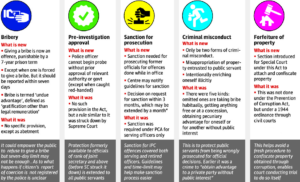 6. Immediate forfeiture: For the first time, law enforcement is empowered with powers for immediate attachment and forfeiture of illegal property of a public servant, invoking provisions of the Prevention of Money Laundering Act. The ‘possession’ of ‘illicit property’ itself, is sufficient cause for prosecution.

7. Timely trial mandated: For the first time, it is mandated to conclude the investigation and trial within 2 years, extendable up to a maximum of 4 years; ensuring timely justice.

8. Protecting the honest: The threat and fear of unjust, malafide prosecution abusing existing loopholes and legal anomalies, had scared bonafide officers into a policy paralysis, fearful of decision-making. Therefore, to empower honest public servants to perform their duty without fear or favour, as per laid down laws, policies and procedures; corrections have been made for protecting their bonafide decisions from malicious threats and harassment.

FRDI BILL In Detail PDF : THE FINANCIAL RESOLUTION AND DEPOSIT...

Government Adda - January 12, 2018 0
What is the FRDI Bill about? India now has a law to swiftly address the issue of insolvency of companies in the manufacturing sector. Essentially,...

Government Scheme of the day