Directions(1-5): Study the following graph carefully and answer the questions given below it: 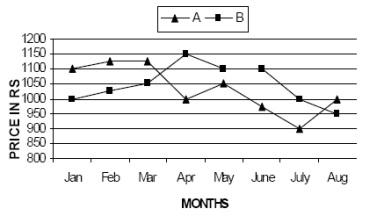 Q3. In which of the following pairs of months was the price of commodity A same?
a) January – March
b) May-June
c) April- August
d) July-August

Directions (6-10): Study the table carefully to answer the questions given below. Number of animals in grassland of four different countries in five different years

List of Public Sector Banks with their Headquarters, Taglines, & Name...

Quant Quiz of the day