People Power Corporation presently employs three Managers (A, B and C) and five recruitment agents (D, E, F, G and H). The company is planning to open a new office in San Jose to manage placement of software professionals in the US. It is planning to relocate two of the three managers and three of the five recruitment agents to the office at San Jose. As it is an organization which is
highly people oriented the management wants to ensure that the individuals who do not function well together should not be made as a part of the team going to the US.

The following information was available to the HR department of People Power Corporation.

2. If A is to be moved as one of the Managers, which of the following cannot be a possible working unit?
(a) ABDEH
(b) ABFGH
(c) ABEGH
(d) ABDGH

4. Given the group dynamics of the Managers and the recruitment agents, which of the following is sure to find a berth in the San Jose office?
(a) B
(b) H
(c) G
(d) E

4. The maximum amount invested by Ghosh Babu in any one month was in:
a) January
b) February
c) March
d) April

Directions : (1-5) Study the information carefully to answer the questions that follow

4.What is the total number of boys who are enrolled in Dancing?

5.What is the total number of students enrolled in all the three classes together? 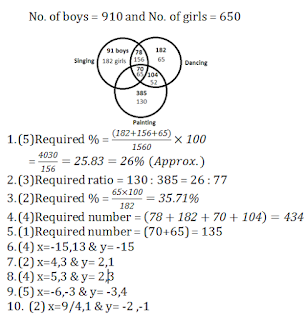 Directions (1-5): Read the information given and answer the following questions accordingly.

Not surprisingly the growth of the hotel industry is driven by the increase in the number of people using hotels and the increase in per person use of the hotel. In 2004, it is expected that there will be 200 million hotel users in India or about 20 per cent of the population will generate Rs. 50 billion in hotel revenues. Industry revenues should expand from Rs. 50 billion to Rs. 150 billion by 2008, while the number of users should grow to over 560 million or to about half the population of India in the same period.

Q2. What will be the simple average growth rate of population of India in the given period 2004-2008?

Q3. What will be the growth in percentage of users in India by 2008?

Q4. What will be the percentage growth of the revenues of the hotel industry in the given period?

Q5. It is believed that if 50% of the population of any country can afford hotel-use, it is economically developed. Can we say that India will be a developed country by 2007?

Directions (6-12): Read the information given and answer the following questions accordingly.

Bihar and Orissa are the most deprived states of India. While they contain one-fifth of India’s population, they have almost one-third of India’s illiterates. In 1998, only a small fraction of Orissa and Bihar’s population was literate versus 85 per cent of Kerala’s population. More than two-thirds of the births are not attended by any medical facility, 1/10th of the infants born in Orissa and Bihar die in infancy and an equal number before reaching the age of five. Almost 90 per cent of the under five deaths are due to malnutrition.

In Orissa and Bihar, out of 100 children enrolled in school, 32 are girls. And out of 100 who attend Std X, only 10 are girls. Only 38 out of 100 Indian women are literate versus 57 per cent of males. Even in wealthy states such as Punjab, girls suffer from malnutrition seven times more than boys do. The total population of the country was 90 crore in 1998 and the ratio of male to female in India was 10 to 9.

Q6. According to the information provided, what percentage of the infants in Orissa and Bihar attend Std V?

Q8. The Orissa and Bihar, out of 100 born, approximately how many children work as child labourers?

Q9. What percentage of girl children enrolled in school reach Std X in Orissa and Bihar?

Q12. The number of illiterates in Orissa and Bihar in 1998 is almost:

Directions (13-15): Read the information given and answer the following questions accordingly.

The prices of the units on the different planets were as follows:

The number of units of CSP sold on Jupiter was 300.

The number of units of CP sold on Earth was 600.

Q13. The number of units of CC sold on Jupiter is:

Q15. The overall revenue generated is the highest from

We do not have any information about 2007. Hence the data is inadequate.

Sol. Since we do not know how many children reach Std X, the answer cannot be found. Hence, option (d).

Sol. Since we do not know the exact population of Kerala, Orissa and Bihar, the answer cannot be found.

The answers can be read out of the table itself.

Sol. None of these

Directions (Q. 1 – 5): Study the given information carefully to answer the questions that follow:

Directions (5-7): A, B and C started a business by investing Rs 800, Rs 1600 and Rs 2000 respectively. After a quarter they invested amounts in a ratio 1 : 4 : 2. After another quarter, they invested amounts in ratio 3 : 2 : 3.In the last quarter the ratio of investments was same as in 2nd quarter. Also in the last quarter, the respective amounts of A, B and C was double than the respective amounts invested in 2nd quarter. The total investment of C before 4th quarter was Rs 1400 more than that of A during same duration. Also ratio of B’s share in profit to total profit at the end of year was 66 : 153.

Government Adda - January 4, 2020 0
Carbon is the backbone of life on Earth. We are made of carbon, we eat carbon, and our civilizations—our economies, our homes, our means...

All About Promissory Note