bankBanks implies the financial institution that takes public deposits and extends credit to those who need it. They are a substantial part of the financial system, which assists in the overall economic development. These are broadly classified as scheduled and non-scheduled banks in India regulated under the Banking Regulation Act, 1949, wherein scheduled banks include all the commercial banks like nationalized, foreign, development, cooperative and regional rural banks. 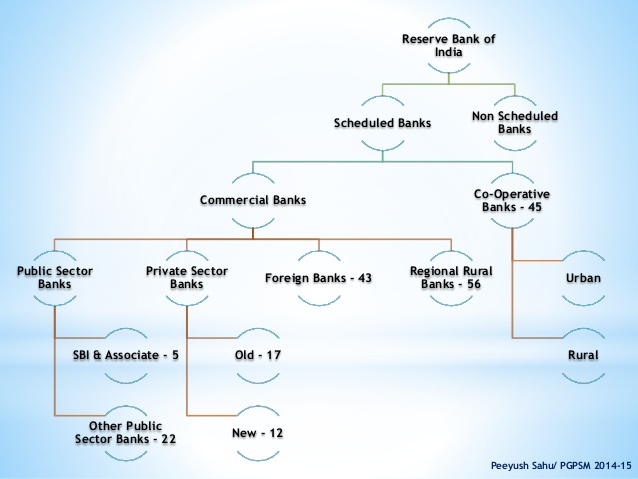 In our country all banks are scheduled banks except four Local Area Banks and some Non-scheduled Urban Cooperative Banks. As of February 2015, these four local area banks are:

Scheduled Commercial Banks can be divided as follows:

Public Sector Banks (PSBs) are banks in which the government has a majority stake that is more than 50%. The shares of public sector banks are listed on stock exchanges.

As of now, India has 27 Public Sector Banks. This number includes SBI, its 5 associates and 19 other nationalized banks. Two other banks, namely IDBI and Bhartiya Mahila Bank are two banks which have been categorized by RBI as “Other Public Sector Banks”.

State Bank of India (SBI) is India’s largest bank by assets. It has around 17,000 branches and around 200 foreign offices. It is the banker to millions of Indians and has over 2 Lakh employees. SBI was formed in the British Era. It is the child of three presidency banks, namely, Bank of Calcutta (which was later renamed as Bank of Bengal), Bank of Bombay and the Bank of Madras. In 1921, these three presidency banks were merged and the entity was called as the Imperial Bank of India. After about 35 years, in 1955, the Imperial Bank of India was nationalized and renamed as the State Bank of India. This makes SBI the oldest Bank in India.

Although SBI comes under the definition of a nationalized bank, RBI puts State Bank of India and its 5 associate banks under a separate category ‘SBI & Associates’).

There are 12 old private sector banks:

As of now, there are 45 foreign banks which are operating as branches in India.

There are 5 Non-Scheduled Urban Cooperative Banks in India

Along with this 4 local area banks in India which, forms under non-scheduled list of Banking as per RBI.

Government Adda - December 5, 2019 0
The planetary system we call home is located in an outer spiral arm of the Milky Way galaxy. Our solar system consists of our star,...

All About – Rythu Bandhu scheme

Government Organization of the day

All About (BCs) model for financial inclusion