Time, Speed & Distance is one of the most important topics in quantitative aptitude section in various SSC and Banking exams.

AVERAGE SPEED WHEN DISTANCE ARE SAME :

If the unit is in km/hr and it is converted into m/sec by multiplying it with 5/18,

If the unit is in m/sec and it is converted into km/hr by multiplying it with 18/5,

If Distance is Constant then, Time(T1 &T2) and Speed(S1 and S2) is inversely proportional to each other S1/S2=T2/T1

If Time is Constant then, the ratio between Distance and Speed is directly proportional to each other.

If a man rides a distance of 540km at the rate of 60Km/hr .Then at what speed he should ride in order to reach the destination less than 3 hrs than his usual speed express in m/sec?

1. A increases his speed by 5km/hr then time taken reduced by 20%.What is the initial speed of journey?

3. A man travels on a Scooter from A to B at a speed of 30km/hr and returns back from B to A at 20km/hr. The total journey was performed by him in 10hr.Find the distance from A to B?

#2 TYPE 2 : BASED ON REACHING THE DESTINATION EARLY AND LATE:

Let us consider a man starts from his home by 9.00A.M.

Here we don’t know the distance between them so lets take L.C.M of speed and consider it as the total distance

Therefore the distance between his home and office is 60Km.

1.A bus moves along the road which is in the shape of square.It’s speed along each side of the square are recorded as 50km/hr,25km/hr,60km/hr and 90km/hr .Find the approximate average speed of the bus in km/hr)?

Here we don’t know the distance  bus moves so, take

2 .A man walks 7.5 km at a speed of 3km/hr. At what speed would the man need walk during the next 2hr to have an average of 4km/hr for the entire session?

1. When a man travels a distance with different speed separating the distance in to 3 equal halves and it reaches the destination after travelling with velocity of 12km/hr, 15km/hr and 20km/hr. Find the average speed of the man?

2.A Car Driver covers a distance between two cities at a speed of 60km/hr and on the return his speed is 40km/hr.He goes again from the 1st to the 2nd city at twice the original speed and returns at the half the original return speed.Find the average speed for entire journey?

#4 TYPE 4:BASED ON DIRECTIONS:

1 .Two men starting from the same place walk at the rate of 4km/hr and 4.6km/hr respectively. What time will they take to be 3 km apart ,if they walk in the same direction?

2. Two cars A and B are running towards each other from two different place which is 88km apart. If the ratio of the speeds of the cars A and B is 5:6 and the speed of the car B is 90km/hr, after what time they meet each other express in mins?

1.Ram and Sita are walking towards each other with the speed of 10km/hr and 20km/hr ,respectively over a road 900km long. How long will they meet?

2 .The thief escaped from the jail at 12am on Monday and escapes at the rate of 40km/hr. Police notice at 6am on the same day and searches him at the velocity of 50km/hr at what time and on which day they catch the thief?

1.I started on my bicycle on 7 AM to reach a mall. But after going for a certain distance my bicycle went out of order. Then I rested there for 35mins then returned home at 1PM.What is the distance covered by me if my cycling speed be 10km/hr and walking speed be 1km/hr?

Let my Distance be X,

Q. Two persons A and B started walking from two places P and Q respectively towards Q and P at 8.20 A.M. Their speeds of walking were in the ratio 4:5. They met at a place between P and Q ,spent some time together for coffee and then both started towards their respective destinations at 9.27 A.M. If A reached Q at 10.32 A.M., how much time they spent together?

It is therefore clear that :

The solution is that of finding the time spent together by them which is t.

Hence, confirmation of the answer.

1)Akash,Vikash & Vinesh are the three friends left City A and move to City B with equal intervals of time between them starting from Akash.And they reach City B simultaneously and again move to City  C which is 300 km from City B.Vikash reach City C before an hour Akash reach the City C.Vinesh reaches City C & immediately travel  to City B and meets Akash 100km away from City C.Find the Speed of Akash?

Friends don’t Panic by just seeing the length of the Question this Problem is quite big but can be solved by just knowing Relationship between Time,Speed & Distance.Nothing more is needed to solve these kinds of Problem. 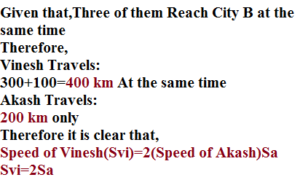 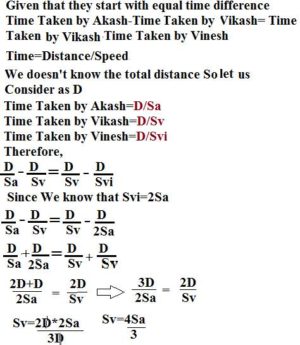 Finding The Value Of Akash: 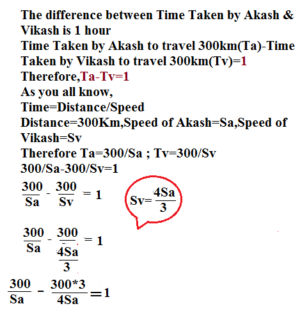 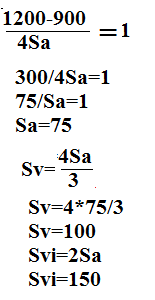 Friends this Problem is quite bigger and these type of Problem can be solved if we know to find the Relationship between them.

As per given in the question

Then it is Given that they start with equal intervals of time,

After the next Part is Quite easy ,

To find the Value  of Sa,

B beats C by

1.A,B and C participated in a Circular Race and A completes the race in 20 sec B in 15 sec and C in 10 secs if all the three starts at the same time and the same point then find when all will meet at the first time?

So they will meet in 60th sec

5. Suppose a man covers a certain distance at x km/hr and an equal distance at y km/hr. Then, the average speed during the whole journey is[xy/(x+y)] km/hr.

Average speed should not be calculated as average of different speeds, i.e., Ave. speed ≠ =Sum of speed / No. of different Speed

There are two different cases when average speed is required.

When the distance covered remains same and the speeds vary :

When a man covers a certain distance with a speed of x km/h and another equal distance at the rate of y km/h. then for the whole journey, the average speed is given by

4(a) Bodies moving in same direction

When two bodies move in the same direction, then the difference of their speeds is called the relative speed of one with respect to the other.

When two bodies move in the same direction, the distance between them increases (or decreases) at the rate of difference of their speeds

4(b) Bodies moving in opposite direction

Relative speed of one body with respect to other body is sum of their speeds.

Increase or decrease in distance between them is the product of their relative speed and time.

Important tricks to solve the problems:-

We can deduce the following from this formula:-

Average Speed = Total Distance Traveled / Total Time Taken
– Remember that average speed is NOT the arithmetic mean of the speeds.
– Also, average speed can never be double or more than double of any of the original speeds.

If L1 and L2 are the lengths of two trains moving at speeds V1 and V2 respectively, then the time taken by them to cross each other given by,
Time to Cross = ( L1 + L2 ) / (Relative Speed)

– When two runners are on the same circular track, the time taken for them to meet for the first time is given by the following expression:-
Length of the track / Relative speed of the runners

runner over the slower one.

– If ratio of speeds of two runners running in circular track is x : y, they will meet at the starting point again in the time given by the following expressions:-

Some points to remember while solving questions based on these are as follows:-
– the distance covered by the winner = length of the race
– loser’s distance = winner’s distance – (beat distance + start distance)
– winner’s time = loser’s time – (beat time + start time)

– if a race ends in a deadlock, i.e. both reach the winning post together then beat time = 0 and beat distance = 0

All You Need to Know About – Short term loans...

Once in lifetime Offer Get 50% Off On Quant Booster- A...