What does ‘solving the triangle’ mean?

It means that if we are given some facts about a triangle, we can find some or all of the rest. For example, if we know two sides of a right triangle we can find (or ‘solve for’) the third side using Pythagoras’ Theorem.

To completely solve a triangle it usually means finding everything about it – all three sides and all three angles. But often we are just interested in one unknown aspect of the triangle.

If you are familiar with trigonometry, the following tools can be used with any triangle:

Again, if you are familiar with trigonometry, the following tools can be used with right triangles:

The tools listed above can be used in any combination. There is no ‘right way’ of solving a triangle (or any other geometric problem). Just as in woodworking, you can use the tools in many ways and in many sequences. Think about what you have been given to start, and find tools that lead you in the direction you want to go.

The Law of Sines says that in any given triangle, the ratio of any side length to the sine of its opposite angle is the same for all three sides of the triangle. This is true for any triangle, not just right triangles.

As you drag the above triangle around, you will see that although this ratio varies, it is always the same for all three sides of the triangle.

Written as a formula

The Law of Sines is written formally as 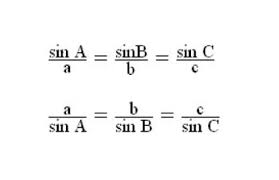 What is it used for?

A triangle has three sides and three angles. The Law of Sines is one of the tools that allows us to solve the triangle. That is, given some of these six measures we can find the rest. Depending on what you are given to start, you may need to use this tool in combination with others to completely solve the triangle.

When do I use it?

You can use the Law of Sines if you already know

The first allows us to calculate the “Law of Sines” ratio s. Then we can use this ratio to find other sides and angles using the other givens.

It turns out that the “Law of Sines” ratio is also the diameter of the triangle’s circumcircle, which is the circle that passes through all three vertices of the triangle. This is sometimes formally written as

where r is the circumradius – the radius of the triangle’s circumcircle.

So if we are given one side and its opposite angle we can find the “law of Sines” ratio for the triangle. Then, using that ratio and the other given elements, we can solve the triangle.

In any triangle, given two sides and the included angle, the third side is given by
the Law of Cosines formula:
c2 = a2 + b2 – 2ab cos(C)
Try this Drag any vertex of the triangle. Note that the length of the unknown side c is continually recalculated using the Law of Cosines.

The Law of Cosines is a tool for solving triangles. That is, given some information about the triangle we can find more. In this case the tool is useful when you know two sides and their included angle. From that, you can use the Law of Cosines to find the third side. It works on any triangle, not just right triangles.

The Law of Cosines is written formally as

where a and b are the two given sides, C is their included angle, and c is the unknown third side. See figure above.

To illustrate, press ‘reset’ in the diagram above. Note that side a has a length of 30, and side b has a length of 18.9. Their included angle C is 58°. By plugging these into the Law of Cosines we get a length of 25.6 for the the third side c.

As you drag the above triangle around, this calculation will be updated continuously to show the length of the side c using this method.

We are given a triangle with two sides (a,b) and the included angle C, as shown below.
We will find the third side.

Giving us the length of the third side c.

Government Organization of the day

All About – Prompt Corrective Action